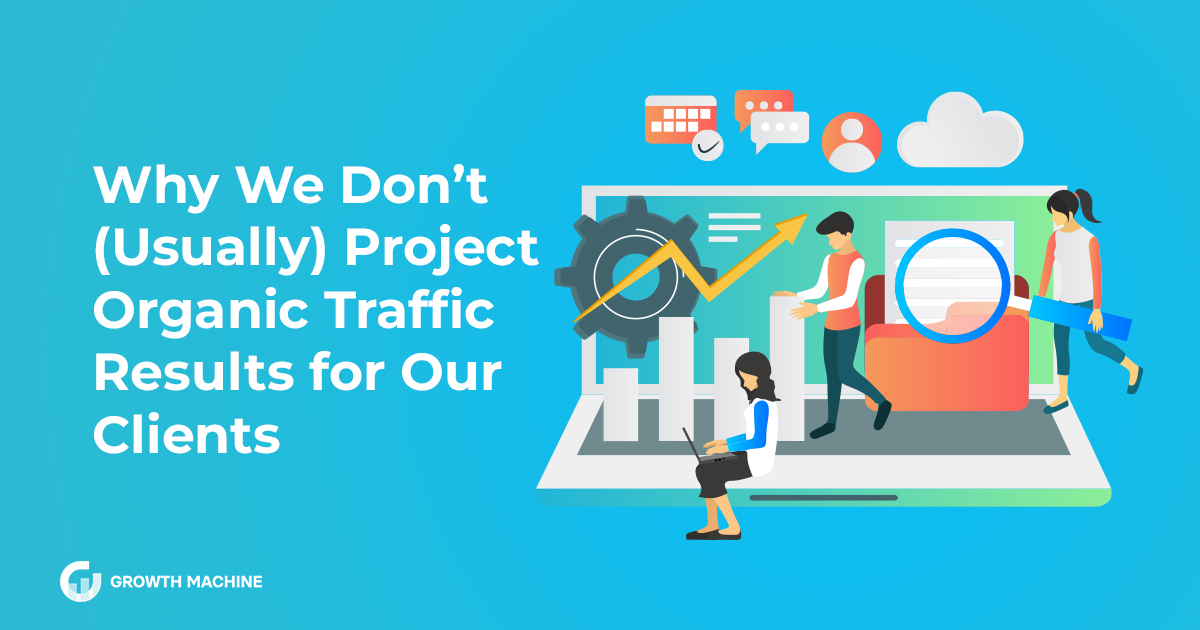 We hear different versions of this question a lot. And while we love doing what it takes to make sure we give our clients what they need, we will usually say no to this request.

Why? Well, projecting exact organic traffic results is impossible. If an agency ever tells you that they can predict it, that’s a huge red flag!

While we can’t tell you precisely how much traffic you’ll see on your site by a certain date, we have other ways of forecasting the impact of our work on your site’s traffic, and what to expect from your investment in SEO.

So why don’t we (usually) project organic traffic results for our clients? In this article, I’ll share:

Plus, I’ll answer some frequently asked questions about traffic projections.

The Three Factors That Influence Projections

When you’re talking about estimating traffic changes, you have to start with the inputs.

We look at three major factors that influence future traffic levels of a site.

The first two inputs go hand in hand: the keywords you choose to target, and how often you are publishing keyword-optimized articles.

Are the keywords the right fit for your site’s authority, meaning Google will consider ranking your site for these keywords?

Are they relatively low-competition, meaning you have a chance to rank for them?

And do they have moderate to high search volume, meaning you have access to a decent amount of organic traffic when you do rank?

Are you publishing frequently enough to build the kind of authority you will need to compete in your specific category?

‍Publishing cadence is the easiest lever to pull, and the one that is primarily responsible for your site’s initial growth after it reaches the critical authority threshold.

The third  input that influences your site’s performance — and yeah, this might sound obvious — is Google!

If you work with us, you’re probably familiar with our references to The Algorithm. That’s because the almighty code that serves up all of Google’s results (known as SERPs or Search Engine Results Pages) ultimately controls what searchers see, in what order, and ultimately, what sites see traffic from what keyword or query.

For obvious reasons — we can’t control the algorithm! — and not so obvious reasons — sometimes, Google releases algorithm updates without warning or rolls them out piecemeal and seemingly randomly — we have the least control over this traffic influence.

That doesn’t mean we can’t improve the chance that the algorithm will recognize a site’s content as high quality, relevant, and rankable. In general, we know what Google looks for: authoritative authors and substantive information, high quality user experience, and good site speed. We also use tools that analyze the language in the top results for the search term we’re going after. This guides our writers to create a keyword-optimized article that has the best shot at ranking.

So, while an unexpected algorithm update, sudden change in consumer interest (like what we saw at the beginning of the pandemic!) or strategic pivot from a competitor might temporarily disrupt your ranking positions and traffic, the good news is that Google is smart and this volatility is usually short lived. Google does a great job recognizing which content is truly offering a high quality experience for the user (*cough* the people our clients want to reach *cough*).

But, this kind of volatility is both inevitable and impossible to predict.

How We Calculate our Organic Traffic Projections

We have a relatively simple formula that we use to ballpark expected organic traffic based on the list of keywords we’ve identified for that site.

There’s a little more that goes into it, but that’s the general idea.

When and Why We Project Future Traffic

So if it’s so straightforward to project, why don’t we like to offer our clients traffic projections more often?

Our projections offer insight into the relative impact of investing in SEO vs not investing.

They’re helpful for making decisions like “Is this the right time for us to focus more on attracting organic traffic?” or “When should we think about increasing our publishing cadence?”

Organic traffic projections are most valuable for determining whether the opportunity to pursue organic traffic is right for your business.

That’s why we’ll happily project (approximate) traffic for a new or prospective client who asks for it, while we’ll push back on that same request from a client who has been with us a year or more. In the rare case that we do project future traffic for a long-time client, we’ll look at projections for a quarter or longer periods, instead of each month. Monthly traffic has a lot of ups and downs, but quarterly or annual traffic metrics show clearer trends.

It tends to be easier to predict traffic in a project’s early stages. In the initial months of publishing, we’re targeting white-space keywords that are not as competitive and therefore easier to rank for. We can assume that a well-optimized article has a good chance to rank for these keywords, and project inbound traffic to the site accordingly. This is also the stage in which a site is going from lower authority to higher (recognized) authority in their space. As Google “discovers” a site’s authority, the site’s traffic grows in a predictable pattern.

On the other hand, after we’ve worked with a client for many months, we’ll start to target higher volume, higher difficulty keywords, for which the competition is more fierce. At this stage, relatively minor ranking and traffic fluctuations have a much more noticeable impact on monthly traffic numbers.

As our head of sales, Nathan, who is far better at sports metaphors than I am, says, “The terms targeted earlier [in the project] are like hitting singles, and later, the terms are like hitting home runs.” Singles are easier to hit and more predictable, home runs are hugely impactful but less consistently repeatable.

Furthermore, once a site is beyond the “building authority” state, it becomes more subject to seasonality and other factors that affect traffic patterns. As a result, later-stage growth on a month-to-month basis is far more volatile and difficult to project. Instead, we monitor other growth signals (like ranking speed and total keywords in top three positions) and look for net gains over longer periods of time, like each quarter or every six months.

SEO Projections Are a Ballpark, Not a Base

Although on average, your traffic graphs should track up and to the right — just like our projections — we honestly tell clients their traffic changes will not be linear and it will not necessarily even grow every single month, especially at first.

We never promise that we’ll deliver the precise amount of traffic exactly as we project it, because that would be impossible. And, again, any agency that tells you differently either has no idea what they are doing, or is knowingly lying to you.

There are so many factors that we can’t possibly predict or control that will have an effect — big or small — on your traffic, including and especially what YOU do with your site. (We’ve had clients accidentally de-index the majority of their site, and then wonder why their content stopped ranking. As you can imagine, that set back our progress pretty drastically.)

But we strongly believe that projections are useful for making decisions about when, whether, how, and how much to invest in SEO.

How much traffic can we expect to get if we do “x” amount of content per month?

The model that I described above will be able to tell you based on your site’s historical performance and target keywords. If your site is brand new, we can still project based only on target keywords.

Can you estimate potential results?

Sometimes, but the best time for this is early in your project — we can even estimate results during the sales cycle. The longer you’ve been working with us, the harder it becomes to predict, but we can sometimes ballpark future quarterly or semi-annual results.

‍If we did your project for a year, what could we expect?

We’ll give you a rough estimate of how much traffic you will see over the course of a year, but we can’t promise you’ll hit those exact numbers. But by the time you’re with us for a year, you’ll have a good sense of your site’s organic traffic momentum and whether you should continue to invest in it or not.

I need to show my team/boss some rough projections.

Again, this is easier to do at the start of the project. After six months or a year, we’re more comfortable showing your internal stakeholders the progress to date.

We also provide at-a-glance weekly project updates, more in-depth monthly reports to track and analyze the progress of your project, and suggestions for any strategic changes to optimize going forward.

We invite anyone from your team who has buy-in on this project to join us for these updates, or you can just share our weekly and monthly decks with anyone on your team.

To learn more about how to get your manager or team on board with SEO, check out this post.

Ultimately, we are not big fans of relying on traffic projections — especially monthly projections and projections for a late-stage project. Aside from the decision to invest in SEO, we don’t find these metrics very valuable for decision making, and they tend to set a project up for failure by establishing benchmarks that we are clear we will never precisely meet. We won’t necessarily fall short, but the reality of SEO results is messier than any model could accurately capture.

That doesn’t mean investing in SEO isn’t worthwhile, or that it won’t pay off for your business. It just means that SEO success isn’t going to be effectively measured by comparing actual results to projections.

If you’d like to learn more about how we can deliver results — and yes, perhaps even discuss some potential traffic numbers — schedule a time to meet with Nathan, our Head of Sales.

Keep reading to discover the agency tools we use in our business to streamline our processes — from admin and HR to sales and project management.

Should You Publish on Medium? The Pros and Cons for Growing a Blog

Because of Medium's massive growth, many businesses exploring content marketing build their blogs there first. Should you be one of them?

From the CEO: Why and How I Spent Most of 2021 Making Myself Obsolete

Here are just a few of the many important reasons a CEO should make themselves obsolete. Read on for my process of why, when, and how to get yourself out of the way, to allow the company to thrive.

Thank you! Your submission has been received!
Oops! Something went wrong while submitting the form.