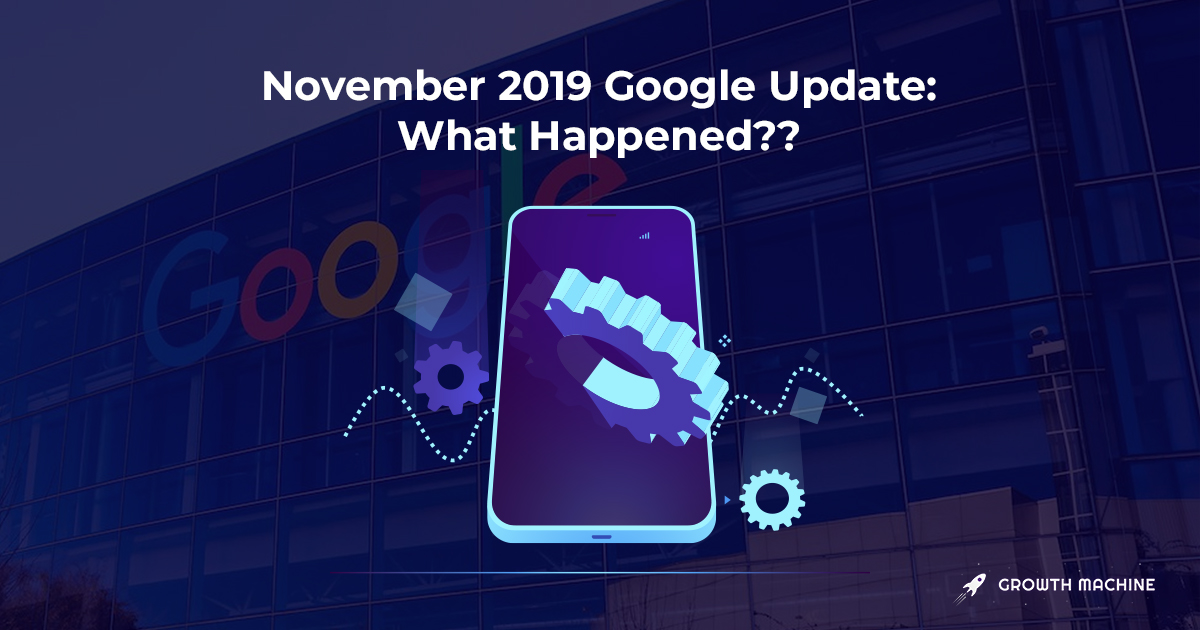 As if all the SEO chaos this year wasn’t enough, Google decided to drop what seems to be another major update in early November.

This follows close on the heels of the September update and the announcement of their new BERT system that could impact as many as 10% of all searches.

Since we work with so many companies to help them get more customers through SEO, we try to do our best to understand what happens with each update.

So we spent the last couple weeks digging through what happened on the sites we have analytics access to, as well as what’s being said in the SEO communities online, to try to get some ideas about what changed and what you should do in response.

Here’s what we found.

Notes From Our Sites

As we did with the September 2019 Core Update article, we started by looking at the 100+ sites we have Google Analytics and Search Console access to.

After combing through that data, we found 17 sites that experienced a major traffic shift from the update. Major, in this case, is anything greater than a 10% fluctuation, except in a few cases where we went below 10% for sites with large amounts of base traffic.

While this is not a huge dataset, and we should be careful to draw too many conclusions from it, by looking at some of the trends across the impacted (and not impacted) sites we can get some ideas about what might have changed.

Let’s start with the winners.

There was a very clear trend among the winners in our datasets. Many of the health, wellness, fitness, and food brands that were hurt by past updates such as Medic saw a nice traffic boost.

And on top of that, many sites that also sell products related to the health information they provide saw some recovery or boost in their traffic. This fits with one theory we had in September that Google might be reducing the “self promotion” penalty towards sites writing about the benefits of their own products.

First up, a blog in the food space that had seen fairly flat traffic for the last few months suddenly gained 22% organic traffic. This one was interesting since the blog is almost exclusively talking about topics related to their primary product:

Another Shopify store in a similar food space saw a 35% gain. This was one of the highest gains we saw for a store, and it might be because the store in this case houses many of the best blog articles on the site as separate resource pages:

Does that suggest moving some of your best content off your blog and onto Shopify if you have them separated? Possibly. We’d want to see more data, though.

Somewhat in support of that idea, we have two more Shopify health and wellness stores where we saw gains. This one went up 14%:

So far, we’ve seen a lot of good gains for Shopify stores in the health and wellness space, so it’s possible that they’re gaining back the traffic they lost to the Medic update.

We saw similar gains for a few Shopify stores outside of health and wellness as well. This is a broader CPG store, which gained 31% from the update:

And this is a food product ecommerce store, though less explicitly focused on health and wellness:

And in our final Shopify example, this store focused on pets saw a 22% gain with the update:

What about non-stores? We saw a good mix of gains here, without any clear overlap. Here’s a fitness and exercise blog where we saw a 9% gain from the update:

And another food and health blog, but without affiliated products, saw a 29% jump after dropping almost the exact same amount in the September update:

Then there was a surprising one. An affiliate blog in the “make money” space, but a fairly new one, gained 31% with this update.

And another affiliate blog in the health and wellness space gained 67%:

Finally, as an odd and kind of fun one, my personal blog gained 19% after seeing a similar boost from the September update:

What can we take away from all this? A few thoughts:

Now let’s look at the losers we saw and see if that helps.

There were many more cases of the opposite happening, though, so not sure how much to read into this one.

One area we saw a lot of traffic loss was financial sites. This is one finance blog associated with a consumer banking app that lost 43% of its traffic:

Similar to them, an affiliate site in the “make money online” space lost about 32% of their traffic:

One thing worth noting in this case is that an analysis of their backlink profile looks pretty bad:

Could this penalty be related to bad link profiles? That’d fit with some of the other rumblings in the SEO community.

We saw similar losses from two other sites in the “make money online” niche. One that lost 42%:

And another that dropped 26%:

I’m not sure that this was an explicit penalty towards YMYL sites, though there have been many people in that space who reported losses.

Let’s look at what some of the other companies analyzing this are saying, though.

Notes from Other Sites

First up, Marie Haynes, who always has good analyses of these updates, published her notes here.

We didn’t see as much from the travel and aggregator sites, but we definitely saw penalties to affiliate sites and some recipe/food bloggers. So we’re inclined to agree with these categories.

Marie also said, “We feel very strongly that this is a link related update. It could have other components, but links are likely very important!”

This, too, fits with what we saw since some of the sites that lost traffic had some bad links pointing to them, and many that were rewarded were product sites with healthy link profiles.

She goes on to mention that many penalized sites might have engaged in reciprocal link schemes or “top 10 lists” link building. She makes an important caveat though:

“If you have been building links with any of these tactics, we do think that a thorough link audit and disavow could help. What we don’t know, however, is whether Google is simply discounting links that they can now detect as not true recommendations for your site, or whether having enough of these could actually be suppressing the site’s ability to rank.”

This is something we’re looking at closely for our active clients who were impacted by the update. If they lost traffic, we’re digging into their link profile to look for toxic links we can disavow for them to see if that helps.

The Search Engine Journal shared a conversation with John Mueller which dispelled the idea that rank drops would be directly related to the new BERT algorithm change:

“Maybe first of all, this would not be from BERT. The BERT changes are particularly about understanding user queries better and around being able to understand text better in general. So it’s not that we would say that suddenly your page is less relevant. But rather with BERT we would try to understand does this question that someone is asking us, does it match this website best. And usually that’s for more complicated questions. The thing to keep in mind is that we make changes all the time. We’ve made several core algorithm changes as well over the… last month or so, which kind of overlap with the rollout of BERT as well.”

And in another conversation, SEJ shared that the drops weren’t necessarily related to spam links:

"If your site has suffered ranking declines, it’s highly unlikely the declines are due to random spam links."

From looking through our stats and what’s floating around the SEO universe, here’s what we think might have happened:

So what should you do if you were impacted or want to avoid being impacted in the future?

And as always, if you want help getting more customers via SEO, contact us to see if we can help.

Keep reading to discover the agency tools we use in our business to streamline our processes — from admin and HR to sales and project management.

Should You Publish on Medium? The Pros and Cons for Growing a Blog

Because of Medium's massive growth, many businesses exploring content marketing build their blogs there first. Should you be one of them?

From the CEO: Why and How I Spent Most of 2021 Making Myself Obsolete

Here are just a few of the many important reasons a CEO should make themselves obsolete. Read on for my process of why, when, and how to get yourself out of the way, to allow the company to thrive.

Thank you! Your submission has been received!
Oops! Something went wrong while submitting the form.